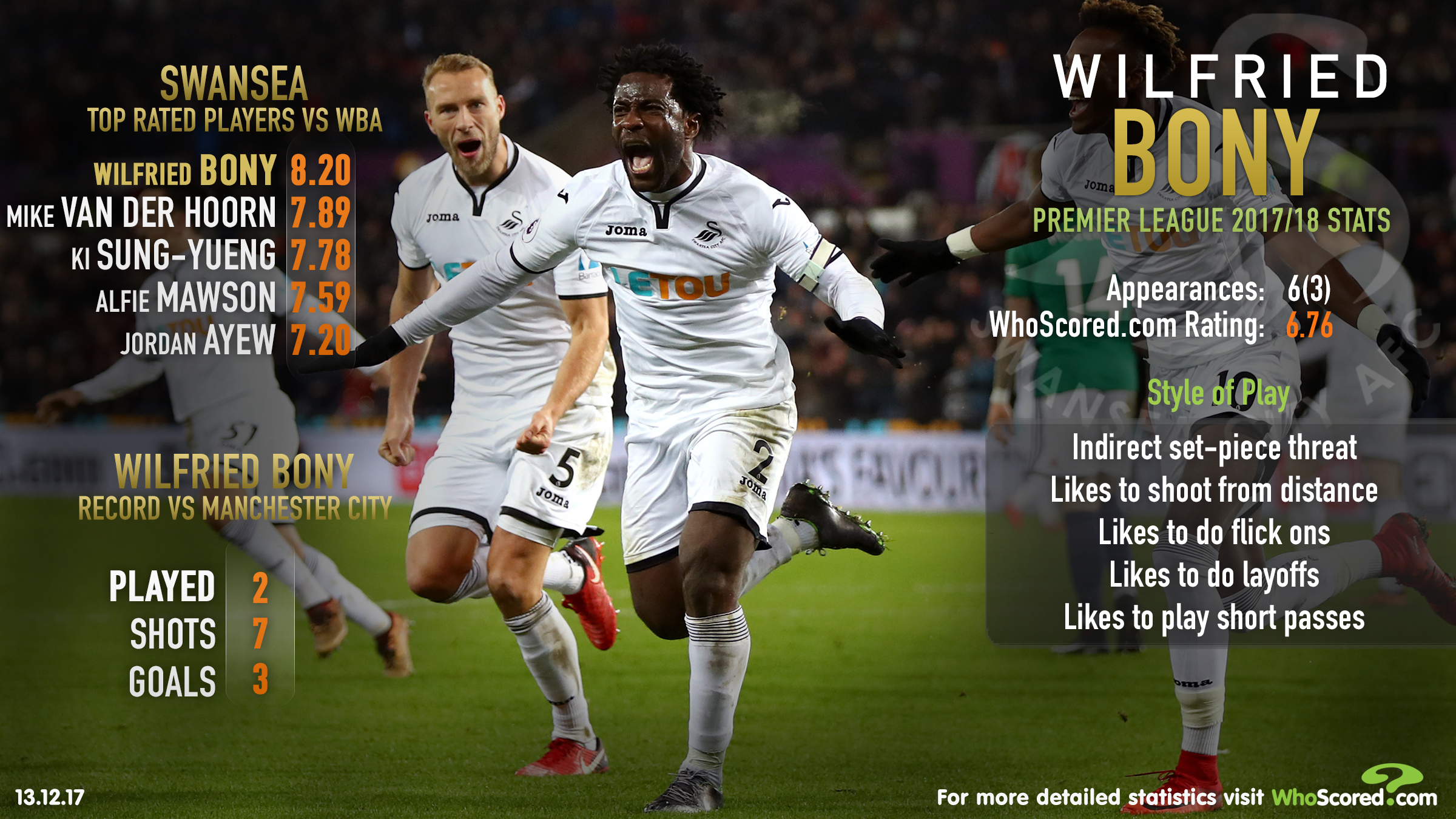 A hard-fought 1-0 win over West Brom on Saturday earned Swansea three vital points and they’ll look to extend their two-match unbeaten home run when the league leaders make the trip to South Wales.

Pep Guardiola’s side may be running away with the Premier League, but they’ve been far from solid at the back in recent weeks, having kept just one clean sheet in their last seven top-flight outings.

What’s more, City have struggled to take the initiative in their last four top-flight matches, with the leaders drawing at half-time in their last four league games. While Guardiola’s side have been getting the job done eventually, the City machine appears to be slowing after a rampant start to the season.

The title favourites are out to secure a record-breaking 15th successive Premier League win, but need to ward against complacency in their bid to make history.

A former player could come back to haunt Guardiola’s team as they bid to write their name into the record books.

Wilfried Bony has begun to find his best form in recent weeks having scored two goals in his last two Premier League appearances.

His match-winning display against the Baggies earned him a WhoScored.com rating of 8.20, which was enough to secure the man of the match award.

In his last two games, Bony has mustered eight shots and he’s evidently getting into the goalscoring positions that endeared him to the Swansea supporters during his first stint at the club.

Manchester City, meanwhile, have developed a statistically calculated WhoScored.com weakness of ‘stopping opponents from creating chances’ and with Bony getting back his to best, they could be made to pay for their carelessness in denying their opponents goalscoring opportunities.

The Ivorian could be the primary beneficiary from City’s at times lacklustre approach to defending.

Indeed, Bony has scored in all four of his appearances in matches between Swansea and Manchester City and you’d back him to add to that in tonight’s match.

Standing between Bony and another goal, however, is Argentine centre-back Nicolas Otamendi.

Following a rough start to life in England, Otamendi has been a stand-out performer for Manchester City this season, with his WhoScored.com rating (7.36) ranking him among the best centre-backs this term.

His quality in the air coupled with his ability to successfully play the ball out from the back has helped the 29-year-old establish himself as one of the best in his position in the league at both ends of the pitch.

It’s unlikely, though, that Bony will give him a chance to settle and having scored three goals in two appearances against City in the past, the forward is Swansea’s dangerman tonight.

He’s already scored against one former team this month. Who’s to say he won’t net against another in the shape of Guardiola’s side this evening?