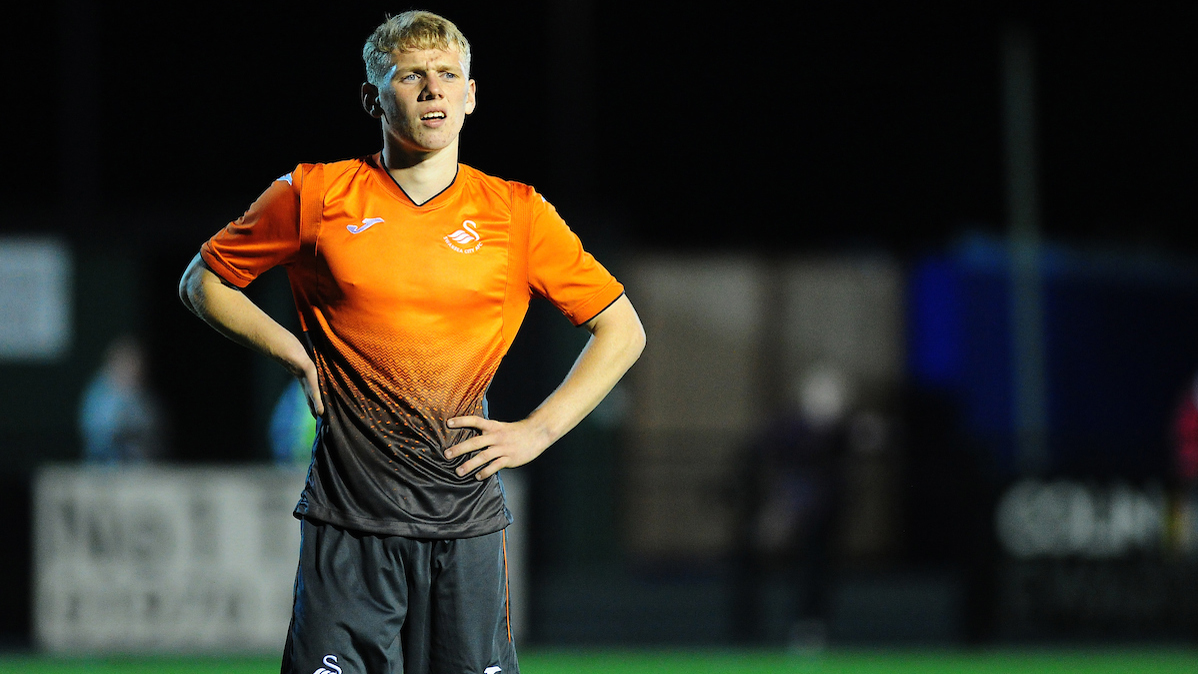 Josh Thomas may be small in size but he certainly has a big future. After all, he has just played a key part in making history with the Swans and learns his trade from a club legend.

The young striker has made huge strides with the club since arriving at the age of 12.

The 16-year-old, who hails from Bridgend, opened the scoring for the under-19s on Wednesday as they captured the FAW Youth Cup for a record-breaking 10th consecutive year following victory over TNS in Aberystwyth.

Having also made 10 appearances and scored twice for the under-18s in Premier League South this season, it is fair to say that Thomas has adapted well at the higher level.

“I was absolutely delighted to score on Wednesday,” he smiles. “It’s the best feeling I’ve had with the club so far, especially scoring three years above myself.

“It’s a big deal for the club to win the tournament for a 10th year in a row, and it meant the world to me to be part of it and win my first trophy here.

“I go into these games with a lot of confidence from my performances for the under-16s and under-18s, and try to make an impact on the pitch.

“I’ve felt myself improve a lot in recent weeks from stepping up to the under-18s. I feel like the faster pace suits my game a lot better.”

Thomas’ progress has undoubtedly been aided by the guidance of one Swansea City legend in particular.

At the request of under-16s coach Matty Jones, Lee Trundle began working with the young forward on a one-to-one basis to fine-tune certain aspects of his game.

And Thomas feels that Trundle’s influence has been hugely instrumental towards his development.

“Matty spoke to Lee about coming in to work with the forward players,” he explains. “He then asked if he could do one-to-one sessions with me

“When I first joined the club, everyone was talking about Lee and what he used to be like up top. I’ve watched him and he was an absolutely unbelievable player.

“When the chance to work with him came along, it was an amazing feeling.

“We work on certain aspects such as getting in behind the defence and how to beat a quicker and stronger player using different movements with the ball.

“It’s been very beneficial working alongside him. I only used to run in behind the defence but I’m now comfortable receiving the ball to feet and turning away from players using skills.”

The steps that Thomas has made are even more incredible considering he only started playing football at the age of 10 – making the switch from rugby union.

So far, it is fair to say the decision has been justified as he looks forward to continuing his progress with the Swans.

The 16-year-old admits he has an eye on stepping up to the under-23s in the near future, while joining the ever-growing list of young players to progress to the first team remains the long-term dream.

With a clear pathway for potential progression and opportunities, the future appears very bright for the young striker.

However, he knows he has a long way to go yet.

“I’m focused on getting better with the under-18s and showing what I can do,” he outlines. “Hopefully, the chance to progress to the under-23s will come.

“To go all the way to the first team would be a dream come true. Knowing there’s a pathway to do that is very beneficial to the young players and gives me a lot of confidence.

“Now we’re in the Championship, you can see the chance is there whereas that hasn’t necessarily been the case in the years gone by.

“I’m very excited about the future but I just have to keep doing what I’m doing.

“The signs are positive but I haven’t achieved anything yet.”