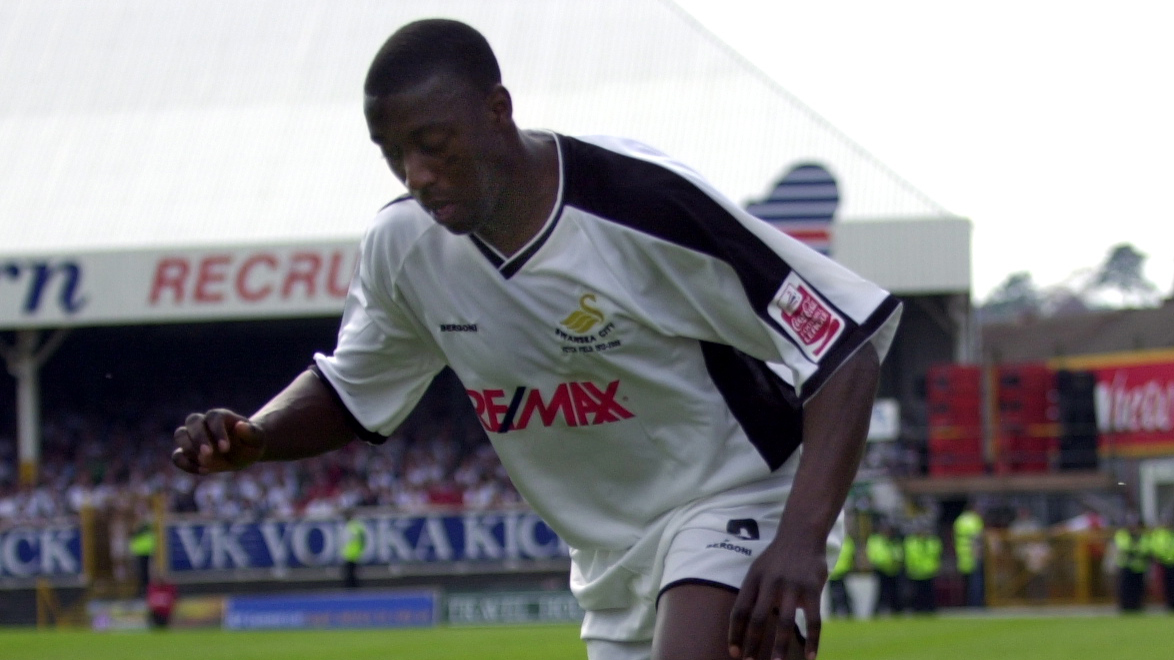 We hope you have enjoyed reading and watching our feature material on Swansea City's final season at the Vetch, hearing the stories of the likes of Lee Trundle, Alan Tate, Garry Monk and Kevin Austin.

Former Swans defender Austin is sadly no longer with us following his passing at the age of just 45 in November 2018, following a battle with cancer.

His influence and popularity among his team-mates and at the club has not been forgotten, and here was have gathered together the memories of a number of his colleagues to share with you.

People may wonder why I smile when we are talking about a mate who has passed away, but Kev was a character on the pitch and a character off the pitch.

He was a go-to guy, if he was around, you knew you would be alright. Was he a centre-back, was he a left-back? It didn’t matter. He would look after you.

They are life lessons that resonate now, how there would be times where we'd ask if he wanted to come out and he would say ‘It’s time for my family’ and he would go home to Bristol to see them.

You don’t appreciate those things at the time. I am so glad I had him in my life.

I spoke to (former Swansea assistant manager) Graeme Jones before coming down to do this interview and we were chuckling at some of our memories of him, some of the tackles he put in.

He was a great guy, but you never wanted to upset him on the pitch as you would always come off second best.

May he rest in peace, he had a profound impact on me and I will never forget the big man.

He was a massive part of the team, not just as a player but a calming influence. He would never rant or shout, he would always speak quietly and calmly and it made sure you always listened.

He was a joker too, he used to do the old joke with new players when he would pretend to make a round of tea and he would come back with empty mugs and make as if he was going to spill it all over them.

You only had to see the reaction in the Liberty Stadium after he died, and the number of people at his funeral from all parts of the game, to know what a special man he was and how deeply he is missed.

Kev was a great guy. One of the nicest guys you could ever meet.

He was so powerful and strong, he could look after himself. But he was so respectful, he did not speak much but he had a presence. It is such a sad story that he is no longer with us.

Kev had a real presence about him, he was a real nice fellow, both on and off the pitch.

When he spoke, you listened. The only time I ever remember him losing his temper was a game against Bristol City where we won 7-1 but he got sent off after a tangle with their striker.

He was waiting for the guy on the side of the pitch and nobody could get him to get off. We could not calm him down, no-one could move him.

I think the ref even kept their centre-forward on the pitch at full-time.

But he was always a real placid guy, always involved in the banter, always joking and he used to do the young lads a kipper at times.

You would come in in the morning and he would say ‘Tatey, the gaffer’s looking for you. He’s not happy. If I were you I’d be the bigger man and go and find him and see what he wants, because he is not happy at all’.

So, you’d go off to find the manager, knock on Kenny’s door and go in saying ‘I heard you were looking for me and wanted to speak to me about something’, and Kenny would just have a blank look and say; ‘I’m not looking for you at all, I don’t need to speak to you’.

He had me with that a couple of times, and I know he did Leon with the same trick.

The other one was you would come in and he’d be gutted, saying ‘I can’t believe it, the gaffer’s going to have us do the bleep test today, he’s not happy, thinks we need to be fitter’.

You'd be dreading it, and then get out training and there'd be no bleep test at all.

He was a great lad.

We loved him. I’m getting a bit emotional speaking about him. A great guy; he was a rock.

He was not an outlandish lad but he had plenty of character, strength and personality. He was versatile and did the job that was needed. He was great with the lads and was a proper professional.

He was an absolute machine in how he looked after himself. We absolutely loved him.

It’s hard to find the words. Even if he was here today I would say the same things.

He was a team player and a genuine guy. It was very sad what happened to him.

We have brilliant memories of him on and off the pitch.

He defined the organisation, discipline and professionalism in our team. He knew when to have a laugh, but when it came down to business it was business.

It was a running joke with us that he was the only player we saw shield the ball out for a goal-kick from the halfway line.

When you’re trying to achieve promotion, you need players in the squad that will be dependable throughout, available and deliver. He was definitely one of those.

I know the Swansea fans still sing his name. He had such a big affection with the fans. That’s important for his legacy and his family. His kids will see how respected their dad was.

Kev rarely had red mist. He’d rarely lose his cool – he was tough as they come but he’d rarely cross the line.

There were only a few times that you thought ‘wow, if I’m in the way of that then I’m in trouble’

I remember a game where a forward caught his head with an elbow, and it took a long time to sort the cut on his head. You calm down after a minute, but he’d been there a while being patched up.

As soon as he got on he lost it and proper went after the player. He was not a guy to get in the way of. Physically, he was a tank.

He had his funny side too.

Kev would always do a trick where you’d be walking into a room of people for breakfast, lunch or dinner. He would pretend to walk with you and then as you’re walking through the door he’d shout ‘woohoo, I’m here’ and then he’d hide. So everyone would turn around and look at you.

We’d always say he’d throw a grenade into a conversation. You’d have two people having a go at each other, he’d say something – we’d say he was throwing a grenade in – and then sit back and watch the argument develop. He loved that.

He used to stay at mine for our Christmas party. The first year he said he was staying home in Bristol as he had a few things to do. So 8am on the day of the party, he’s banging at my door in fancy dress shouting with a drink in his hand. He did that without fail every time.

As a player his career stood out by a mile. He had horrific injuries with his Achilles, but he kept going and going and was a really good player. He was the only man who could shield the ball out from the halfway line. He was a unit and a top, top man.

More than that though, what an amazing person. I don’t use that phrase often.

He was a friend, a true gentleman and a family man. He loved a laugh and a giggle – he’d load the bullets and someone else would fire them.

We played a charity game in 2017 and he came down. He had lost weight and I was unaware of his illness. I am so glad that I had that opportunity to see him.

I spoke to him a number of times during his illness and kept in touch.

I have a load of photos from the time we beat Brighton to win League One and a lot of them are me and big Kev. I miss him dearly.

It’s so sad with Kev passing for all of us and especially his family, his boys and his wife.

Obviously, we all went to the funeral. As a person, he was one of the most genuine people you will ever come across, he was so humble and fantastic as a person off the pitch.

I learnt so much off him by the way he conducted himself.

There’s a funny story actually with me and Kev. We played Bristol Rovers in one of the last games of the season before he signed for the Swans and I was a little jumped up at the time, a bit naïve and I always made a few wrong decisions as I was coming to understand professional football.

They were beating us 2-1 at the time and Kev took the ball to the corner flag and he was like a brick wall, so I stupidly went to smash Kev but I managed to do my ligaments in my knee.

All the boys were then in the sun in Ibiza or Magaluf, but myself and Richie Evans were in doing training and getting the rehab done to sort my knee out.

Then pre-season came and I thought I was in a nightmare because Kevin just turned up and I couldn’t believe it.

He was a gentle giant. He was so softly spoken and as a player he was a seven out of 10 consistently, and he would thank me for saying that.

Every week he was solid as a rock, we all know the song!