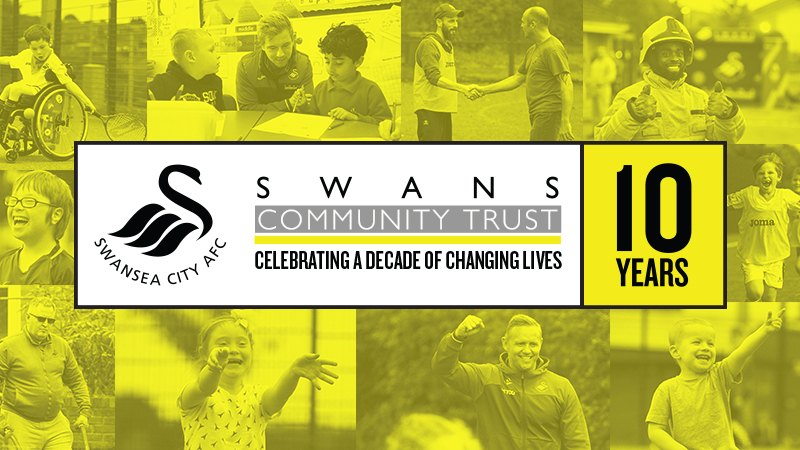 10 Years of the Trust – Josh Rigbey

​​​​​​​As part of our ’10 Years of the Community Trust’ campaign, which is celebrating the successes our official charity has achieved over the years, we are sharing stories and interviews from the heart of our local communities.

Here, we look at the story of Josh Rigbey, who was part of the first group to participate in the Swans Community Trust’s Enterprise project in 2015.

Designed to engage, inspire and unlock students’ potential, the project helps them get to grips with the basic principles of business, enterprise and entrepreneurship.

Josh Rigbey was part of a group of boys from Pentrehafod School who had been placed together in a form group due to behavioural issues and underachievement.

As well as their core subjects, the boys took part in a range of vocational activities during school time, and one of those was the Premier League Enterprise Core Programme.

“The core programme was enjoyable. It helped me with my group work skills and with trusting in my friends. It gave me the confidence to do the subjects I wanted to study in my GCSEs,” explained Josh.

Pentrehafod teacher Chris John was surprised by the change he saw in Josh as the course progressed.

“His confidence improved across all areas and his increased self-esteem allowed him to try new things that he would not have considered before,” he said.

“Josh used the skills he developed in problem-solving and critical-thinking across all his subjects and he would attempt tasks when previously he would have given up.”

After completing the course in Year 9, Josh moved on to take part in the Premier League Enterprise Challenge which saw the participants working on a real-life business challenge set by Premier League executive chairman Richard Scudamore.

“I took part in the Enterprise Challenge because I felt it would give my confidence a good boost and help me make a positive future for myself,” exclaimed Josh.

“The programme gave me the confidence to build relationships and friendships with people I didn’t know before.”

The Enterprise Challenge also gave participants the opportunity to put academic skills they had previously learnt in the classroom into practice.

“It was great to be able to use the skills I learnt in school for a practical project. It helped me understand why school is important,” Josh added.

As part of the Enterprise Challenge, the group proposed a teen ‘Copperstripe’ membership for the club and a fan zone based on the grounds of the former Hafod Copperworks, which saw them reaching the national final.

“It was nerve-wracking to reach the final, but also massively rewarding. It was a huge achievement for me and the rest of the team and was a lot of fun,” added Josh.

Despite being pipped to the post by Manchester United in the final, taking part in the Enterprise Challenge has had a lasting influence on Josh.

He said: “Before the challenge, I would not have spoken in front of people, but after it I had the confidence to do well in my GCSE presentations and to attend interviews for college and part-time jobs. “

Staff at Pentrehafod were also delighted with the positive changes they saw in Josh as a result of taking part in the Premier League Enterprise.

Chris John added: “Through hard work and determination, Josh was able to overcome a lot of the obstacles that he had faced before in school.

“He achieved the Welsh Baccalaureate, he excelled in his English and Welsh oral tests and his added confidence and self-esteem ensured success in his GCSEs above our original expectations.”

The Trust’s enterprise coordinator, Graham Smith, was equally impressed with the progress Josh made over the two years he took part in Premier League Enterprise.

“It was brilliant to see Josh gain confidence, work hard and overcome the barriers that he faced in school,” he said.

“Josh deserves a huge amount of credit for the transformation he achieved in his confidence and academic studies.”

Having done well in his GCSEs, Josh is now studying computing in college and puts some of that success down to taking part in Premier League Enterprise.

“I would definitely recommend other schools to take part in the Enterprise Project as it is so much fun and gives you the confidence you need for later life,” he said.

Look out for more success stories and exclusive interviews in the run-up to the Community Trust’s 10th Anniversary in November.

If you would like more information about Premier League Enterprise, or to find out how your school could take part, please contact Graham Smith via email graham@scfccommunitytrust.co.uk.