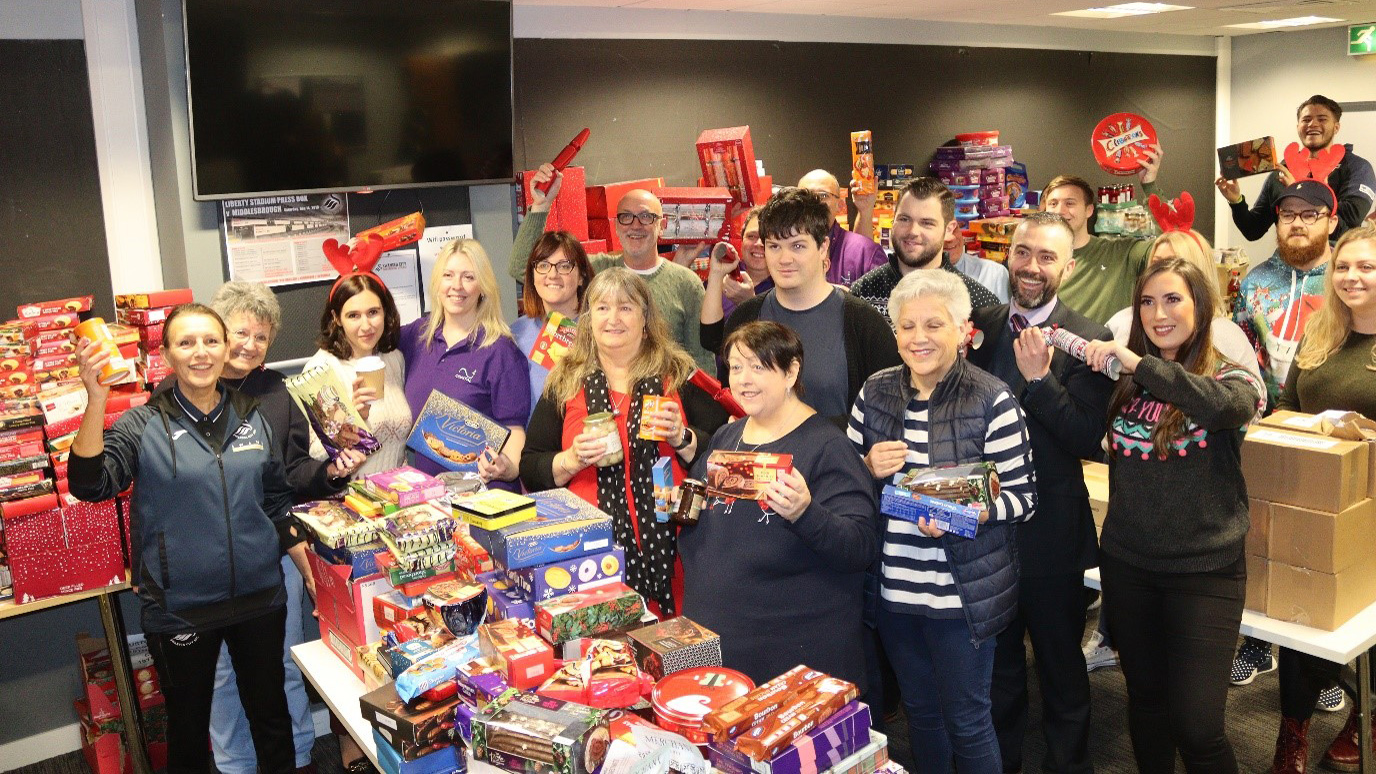 Trevor Birch, Lee Trundle and Leon Britton were among those to help out as Swansea City Community Trust played its part in helping volunteers package and deliver Christmas hampers to various locations throughout the city.

As part of the initiative, Swansea City chairman Birch, club ambassador Trundle and sporting director Britton, and Carolyn Harris MP were all on hand to deliver a surprise hamper to an address in Waun Wen.

The ‘Everyone Deserves a Christmas Hamper’ campaign aimed to provide essential resources to members of the local community who struggle to enjoy the excitement that Christmas can bring, with the collaborative event to prepare the packages being held at the Liberty Stadium.

Thanks to a united effort from small and large businesses and organisations in Swansea – including MPs, AMs, Low Cost Vans, Coastal Housing, Ospreys in the Community, the Co-op, Morrisons, and the Evening Post/Wales Online – the Swansea City Community Trust were able to package and deliver over 200 Christmas hampers for those in need locally.

Carolyn Harris, Welsh Labour MP for Swansea East, believes the campaign has proven to be a major success.

“Last Christmas we discovered that not everybody gets a Christmas due to financial burdens or other factors that prevent them from having fun, and we decided we were going to try and make that a little better by making hampers," she said.

"Last year we delivered 100, but this year we enlisted the help of the local community – The Evening Post, The Swans, The Ospreys – and we have delivered over 200 hampers for families who need that extra bit of help and support.

“I can’t thank the people of Swansea and the club enough for everything they have done. I am looking forward to seeing smiles on people’s faces. Without the good people of Swansea, this would not be happening. There are lots of people who are going to enjoy Christmas because of this work."

Gower Brewery and The Malthouse were one of the many businesses in Swansea who extended a helping hand this festive season. Company director Leigh Dineen, who is also a Trustee for the Swans Community Trust, was delighted to get involved.

“Gower Brewery were delighted to be asked if we could donate to this amazing kind gesture at Christmas time. We hope everyone will enjoy their little tipple on behalf of us all at Gower Brewery and The Malthouse," he said.

Without the support of everyone who donated, and to those who gave up their free time to help package and deliver the Hampers on the day, this effort would have proven fruitless.

Helen Elton, Head of Swansea City Community Trust, was eager to place a spotlight on the generosity of the local community.

“The campaign was such a success because we had so many local businesses and individual volunteers," she said.

"BT sent four of their staff, the Ospreys got involved, Sodexo provided tea and coffee on the day for all the volunteers, Low Cost Vans provided transport to deliver the hampers.

“People were just so generous. It was great to see so many people all coming together in one united effort, and that includes all the MPs and AMs who all worked so hard."

As the demand for extra support in Swansea grows, the importance of campaigns like these cannot be overstated. Thanks to your overwhelming generosity, we made a real difference to those living in hardship in Swansea this Christmas.

Thank you and, on behalf of the Swansea City Community Trust, have a safe and Merry Christmas.