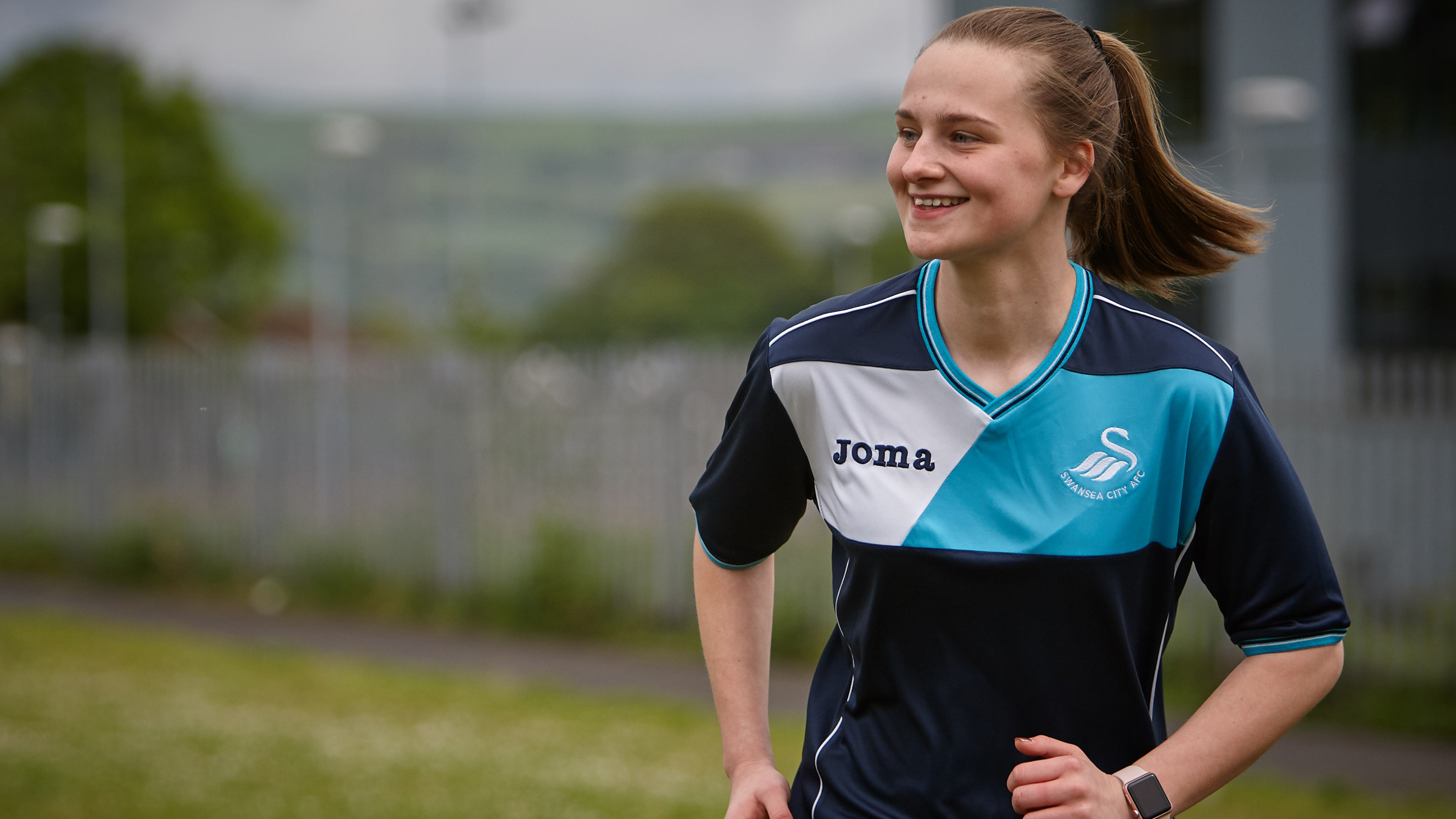 Hannah's swift rise to the top

This time last year Hannah Thomas was preparing to enter her GCSE year – the pinnacle of her school career.

This summer however, after a season of hard work with our Premier League Girls project, the 16-year-old is gearing up to compete in the Champions League – the pinnacle of any footballers’ career.

A keen footballer from an early age, Hannah was first attracted to our PL Girls programme earlier this season and has been attending them at her school of Morriston Comprehensive along with a number of her schoolmates.

“I found out about the Premier League Girls project through my school and from my friends,” Hannah explained. “The coaching and training that was offered sound enjoyable and I knew that I could develop my skills by attending.”

It wasn’t just her skills with a football that flourished and were allowed to shine through the community coaching sessions however, as Hannah has seen herself become more confident both on and off the pitch.

“The Community Trust has allowed me to meet new people. This has given me more confidence to achieve better things. I have met a lot of new friends and the sessions have also helped not only my skills, but allowed me to read the game better.”

Rhodri Morgan, one of her coaches with the PL Girls project, added: “Over the course of the season, Hannah has grown in confidence since she has been attending our sessions. She is a regular attendee, a great leader within the group and helps encourage all the other participants.”

It was at these free weekly coaching sessions in Morriston, that she caught the eye of the club’s Ladies set-up.

“I was made aware of Hannah’s potential by the coaches at the PL Girls project,” explained Ian Owen, manager of the title-winning Swans Ladies. “She was invited to attend some senior team training sessions and impressed. The invitation to attend on a regular basis was offered and shortly after Hannah registered to play for the team."

Delivered in partnership with The Football Association, Premier League Girls aims to provide opportunities for budding young female footballers to take part in the sport. Through these community sessions, the Swans’ PL Girls programme has created a clear talent pathway, which is exactly what happened to the young Welsh winger.

“The Community Trust projects are a great way to introduce and involve young females in sport,” Owen added. “The environment and encouraging methods of delivery entice these people to take part when otherwise perhaps they couldn’t.

“Whilst there, their talent shines through and individuals are given the opportunity to progress."

Hannah’s story however is far from an anomaly.

Current Premier League Girl’s sessions are constantly expanding in both size and popularity and new sessions at new venues are consistently being added to the project’s weekly timetable. These combined with sessions delivered by Premier League Kicks – a project that helped Swans Ladies identify first-team star Katy Hosford - means that the Community Trust coaches are uncovering and nurturing talent each week.

After putting in the hard yards in training with the Swans Ladies, Thomas' debut for Swansea City Ladies followed in March, as she came off the bench in a 3-0 victory over Aberystwyth in the Welsh Premier Women’s League – a game that coincidentally witnessed young participants of the Premier League Girls programme act as mascots for the team as part of the club’s celebrations for International Women’s Day.

“It was a proud moment making my debut with the Swans Ladies,” beamed Thomas as she recalled the game during a PL Girls session held at her school.

“Playing at such a high level, with a group of such welcoming and supportive girls, was a moment I will always remember!”

Since then, Thomas’ hard work with both Swans Ladies and at her girls sessions have seen her earn a number of appearances in her first senior season, and what a season it’s been!

After being crowned champions of the Welsh Premier Women’s League, Hannah and the rest of the squad will travel to Europe this summer to compete in the Champions League.

“Winning the league was brilliant and to qualify for the Champions League is a fantastic feeling,” Thomas added. “To have the opportunity to play at that level will be an amazing experience and I can’t wait to play against some of the best teams in the world.”

It was these accomplishments that saw Thomas receve the PL Girls Achievement of the Year accolade at the Community Trust’s annual awards night.

“It was a great achievement winning the prize. I was very proud to be recognised and this demonstrates how great the sessions are and that hard work pays off," she added.

Now, Thomas' journey will act as a source of inspiration for the next generation of girls that are getting involved with Premier League Girls, as the project seeks to increase the footballing opportunities for girls throughout Swansea and the city’s surrounding communities.

“I feel very honoured and proud to think that others will be inspired to take part in football by hearing what I have achieved through the support of the PL Girls project,” added Thomas.

“I would definitely recommend the project to girls looking to join football and develop their skills because not only has it helped me to become a better player but also helped my social skills through the great sessions that PL Girls offers.”