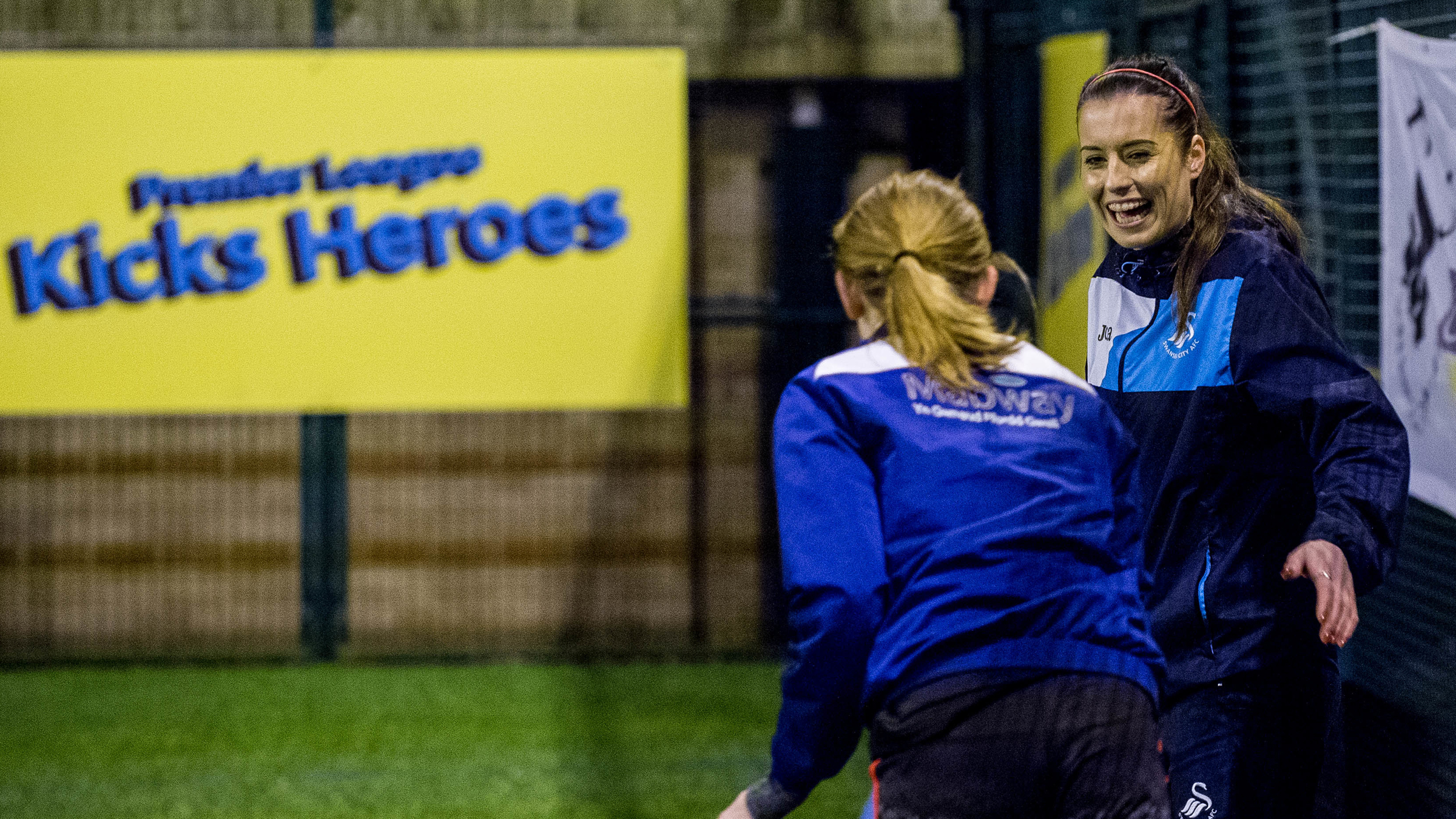 Hosford's getting a Kick out of project

This year, Premier League Kicks celebrates its 10 year anniversary and to mark the event each club is awarding one participant the title of ‘Kicks Hero’ to shine a light on some of the remarkable success stories that have come from Kicks.

Since launching its own PL Kicks project in 2013, Swans Community Trust has engaged with thousands of young people and helped them to develop their potential.

One such young person, and the Swans’ Kicks Hero, is Katy Hosford, who joined our girls’ only sessions at Baglan Boys and Girls Club back in 2013 and has risen through the ranks to represent both club and country.

Beginning as a pilot project in London between the Premier League and the Metropolitan Police in 2006, PL Kicks aims to use football to bring communities together and to engage with young people.

After launching a decade ago, PL Kicks has a long history of developing some of the UK’s best young footballers. From Marcus Rashford to Wilfried Zaha, the Premier League’s flagship community project has helped unearth an array of talent and Katy is no different.

“I joined Kicks as it gave me something to do in the evenings and meet new friends whilst keeping fit,” said Hosford. “I found out about Kicks from one of my friends who was attending the sessions and said that they were great fun."

Hosford was soon to realise the benefits that the project presents to its participants and three years later, she’s still attending.

“I thought I’d try out a few sessions and I’ve been going ever since," she said.

“Before I joined Kicks, I’d just do school work then either go out with my friends or just watch television. The Kicks project allows me to keep entertained in the evening alongside keeping fit and developing my football ability.

“I learnt that there are many ways to spend your evenings rather than staying in your room and doing nothing but it’s not just all about playing football. You meet new friends, develop new skills and work as a team. These qualities aren’t just beneficial in the Kicks project, but to your everyday life.”

Joining the project as a quiet and shy 16-year-old, Hosford has seen her confidence grow as the sessions progressed and is now a leader within the group who encourages the other participants in both drills and in games.

Impressing her coaches both on and off the pitch, Hosford was chosen to represent the Community Trust at the 2015/16, as well as playing at the Kicks Cup in 2014 at Hackney Marshes.

Not only has she proven her skills within the project however, as Hosford’s hard work, determination and leadership have enabled her to become an integral part of the Swansea City Ladies, as well as earning her a call up to the Welsh youth teams.

After first attending the sessions, the left winger soon progressed into the Swans’ Ladies set up where she has become a regular in the starting line-up.

Now in her fourth season, she has won a range of awards and accolades in her career – most recently the 2015/16 First Team Player of the Season award, as well as helping Swans Ladies to lift the WPWL Cup after scoring a brace in the final last season – and has also represented her country at different age levels.

“The Kicks project has given me some amazing opportunities which wouldn’t have been offered to me if I didn’t attend the sessions,” she added.

“The proudest moment of my life is probably captaining Wales at U19 level where we beat both Macedonia and Moldova."

Now at the age of 19, Katy is keen to give back to a new generation of young Welsh footballers and as well as volunteering at a range of community events – including during FA Girls Football Week where they joined first team defender Mike van der Hoorn promote PL Kicks’ girls’ only school sessions – she is now employed by the project.

“I have thoroughly enjoyed being a part of the Premier League Kicks project,” she said. “I feel that it has not only developed me as a footballer, but as an individual also. I have progressed from a participant to a volunteer coach within the Swans Community Trust Kicks project, where I now work as a part time, paid coach.

“By attending these sessions, the experience that I gained I am now able to pass on to others and help them develop."

Swansea’s PL Kicks Co-ordinator, Ian Owen, added: “Katy is a great example of why the Kicks project is so valuable, her journey since joining the project will help us to encourage other young people to get involved.

If you’re a budding young female footballer, we run a range of girls’ only sessions so email Ian@scfccommunitytrust.co.uk for more information on your nearest venue.