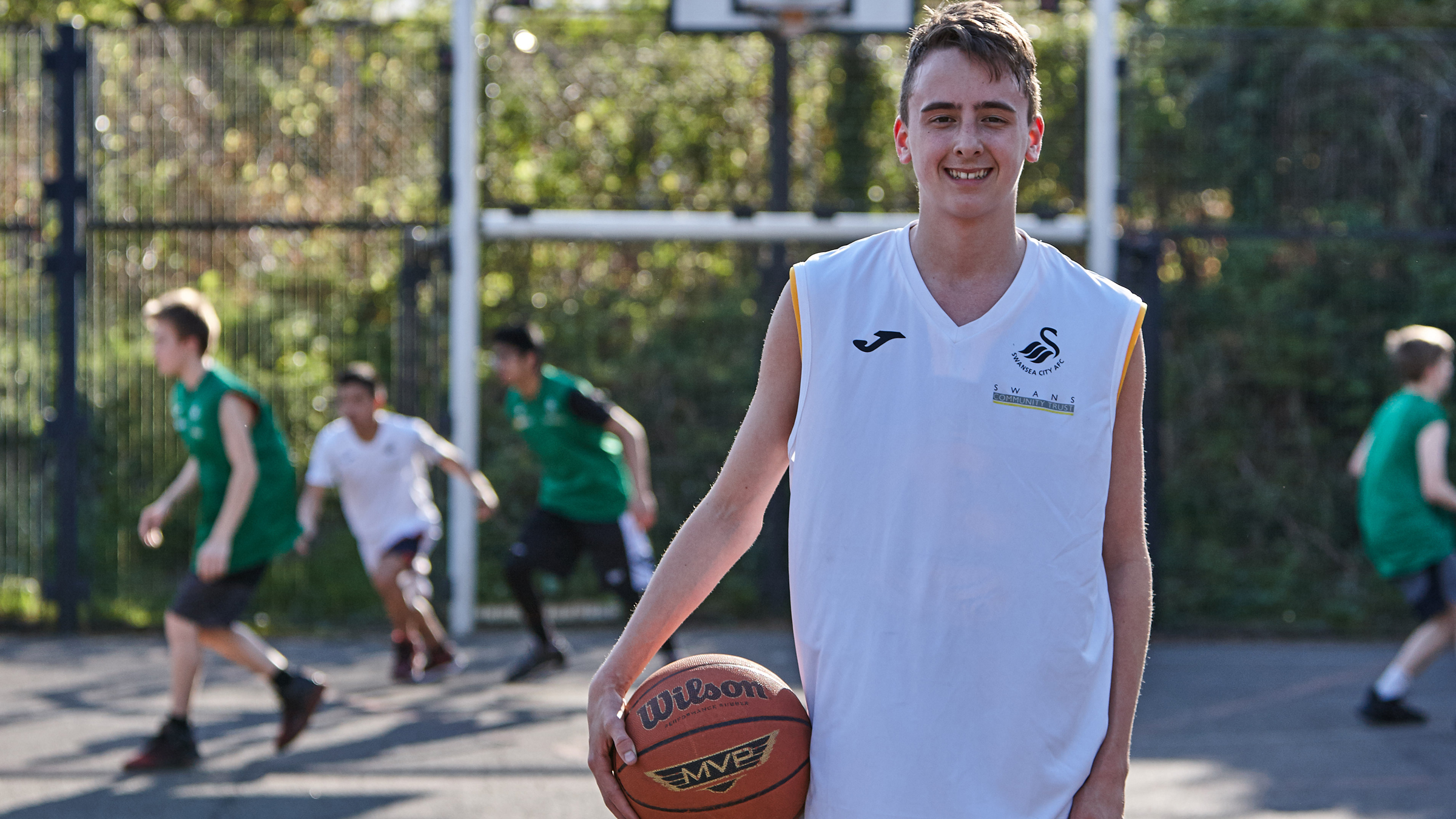 As the official charity of Swansea City, you’d be forgiven in thinking that the only sport we focus on here at the Community Trust is football, but that’s far from the truth.

Across our projects we deliver sessions in not just football but a wide range of sports and not only do we help budding young footballers fulfill their potential, we do the same with others playing other sports.

One such participant is 15-year-old Daniel Garnett who has attended basketball sessions run by our Premier League 4 Sport project for the past three years.

Over that time Garnett has not only grown as a player, but as a person, and after working his way up from our community sessions to earning his first Welsh cap, is well on his way to fulfilling his own potential thanks to the project.

As an avid Swans fan, his interest in the project was piqued the minute he saw posters for the project that uses the appeal of the club to attract young people to take part in new sports.

“There were adverts in my school and posters all over the walls and I thought, ‘why not get involved’,” Garnett explained during his weekly Thursday night coaching session with the project.

“I’ve got a season ticket for the Swans and I’ve always been passionate about football but then the club started to introduce basketball sessions, which is great because it combined my two passions."

After plucking up the courage to attend, Garnett attended his first session at Morriston Leisure Centre and the shy teenager was immediately hooked.

“I think it’s a really good idea to use football to attract people like myself to take up new sports,” he added. “A lot of people seem to be playing football because it’s one of the main sports in Wales, but sports from other countries like basketball aren’t really played as much but the Swans run community projects like this that introduce young people to new sports, which is really good. It entices kids to try new sports.”

Since those first sessions, Garnett has continued to develop and grow and not just in height – although when the hoop is towering over you, that’s no bad thing.

In addition to his skills on the court and the benefits to his health and fitness, Premier League 4 Sport has also helped him come out of his shell.

“I’ve made a lot of new friends who I talk to regularly and play basketball with every week. They’re very good players too, so it’s always a challenge to play with them and it ups my own game."

Not only is it his fellow PL4S participants that have helped him grow as a basketball player, it is the coaches that work with hundreds of young people every week not just at the project’s basketball sessions, but also those coaching tennis, hockey and table tennis.

“The Community Trust coaches who run the sessions are really encouraging and always see the light in people,” he added.

“Even if people aren’t the best to begin with, there’s always a talent there and they can see that. There’s a star inside everyone and Premier League 4 Sport helped mine to shine.”

In addition to helping young people to achieve their full potential in their chosen sport, it also aims to create pathways into local clubs and through strong links with National Governing Bodies, the programme gives participants the opportunity to progress into them, thus creating role models within local communities, that the next generation of participants can aspire to.

After two years of honing his skills with our PL4S coaches, this is what the project did for Garnett.

Filling him with the confidence to join his local team – Swansea Storm – at the beginning of the season, he has spent the past year returning to our weekly coaching sessions to inspire new participants to try their hand at a new sport.

“The Swans’ sessions helped me build my confidence until eventually I plucked up the courage to go to training sessions with Swansea Storm," he added.

For Daniel however, Premier League 4 Sport not only offered him the chance to progress in to Swansea Storm’s U16 team, it also set him up to showcase his skills on an international stage.

Attending Welsh trials earlier this year, Daniel was picked to represent his country this Easter when the Wales U15 side travelled to Ireland to play the Irish national team. This accomplishment not only earned him his first Welsh cap, it also saw him rewarded at the Swans Community Trust’s annual celebration event where he received the Achievement of the Year award.

The result across the Irish Sea may not have gone Wales’ way but that hasn’t put Daniel off fulfilling his dream of becoming a basketball player, nor dampened his passion for the sport – a passion that was sparked by Swansea’s Premier League 4 Sport project.