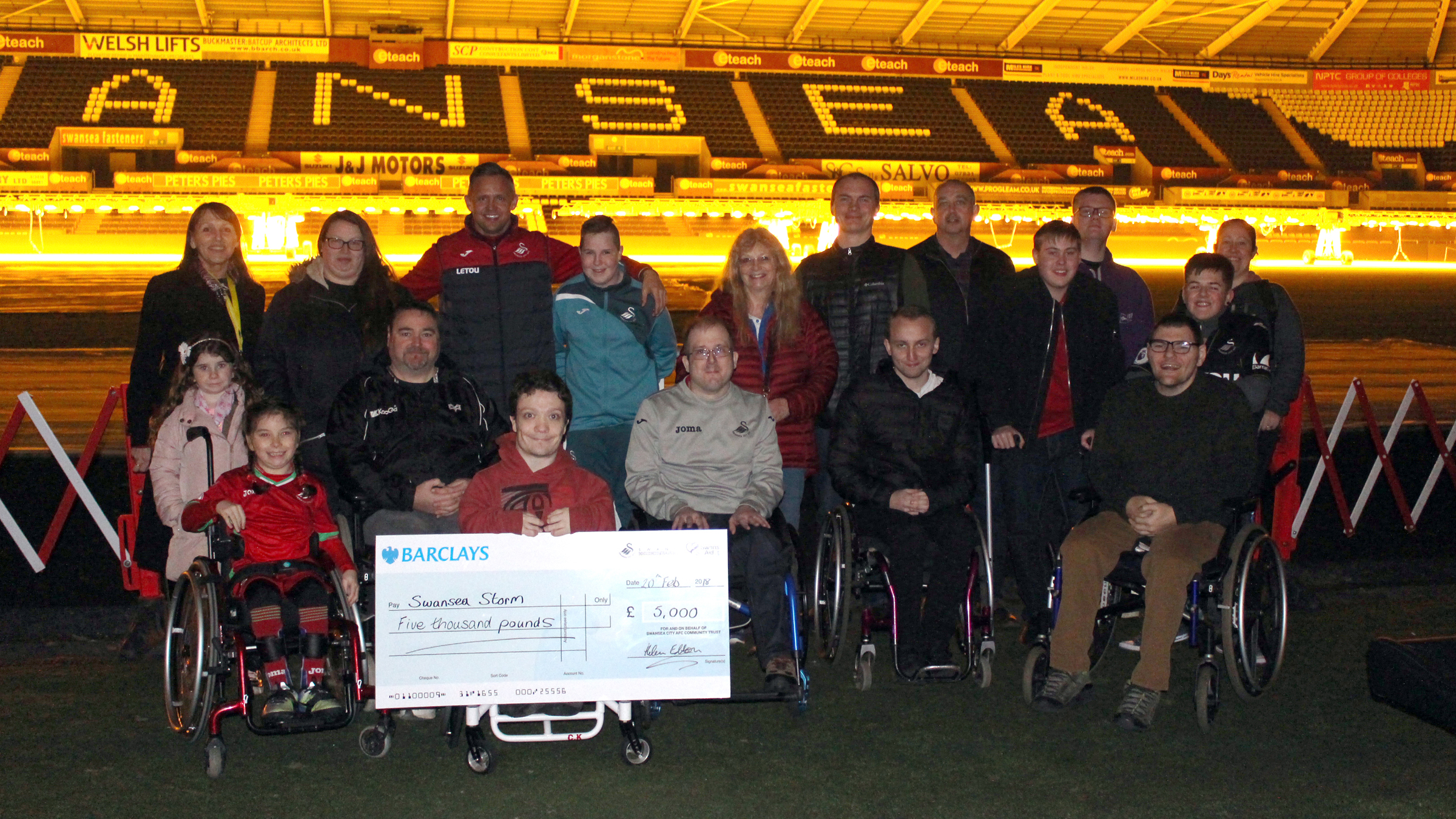 A local basketball club were this week treated to a tour of the Liberty Stadium where they were presented with a grant from SwansAid to fund the development of their new wheelchair basketball sides.

Swansea Storm were awarded £5,000 in our first round of funding for the 2017-18 season, and will use the money to finance equipment for their participants and training for their coaches.

“It will really help the club go forward and achieve its goals. Money is a constant struggle with such expensive equipment and courses within this sport, so any help financially is always very much appreciated.

“The money will be spent on training more coaches, as well as a junior development programme and a bespoke wheelchair for one of our juniors, which will really enhance his ability and development going forward.

“He has a lot of potential and experience training with the under-15 Welsh squad, so who knows how far he can get with the right equipment.

“The extra coaching staff will really help me give the players a better experience when it comes to feedback and development, whilst the junior development programme will allow more specific and bespoke coaching for the younger players.”

Running for nearly a decade, Swansea Storm is one of Wales’ premier basketball teams and in the last few years, the club has attracted considerable interest from players who use wheelchairs.

With 25 members, the club has gone from strength to strength and has achieved a considerable amount of success in a short space of time.

After entering a league for the first time last year and winning promotion to the third division, they now sit top of the higher division.

Swansea Storm now has two wheelchair teams – including a development side – and are looking to establish a recreational team to play in a friendly Welsh league.

The club aren’t stopping there however, and are looking to continue their growth.

“With this new funding, we aim to reach out to a greater number of juniors within Swansea and the surrounding areas, as we feel that we need to protect and encourage the future players of the sport,” James added.

“I would certainly recommend Swansaid to others looking for funding.

“The grassroots clubs are what support and feed into the bigger picture of any sports success and as such, they need as much help as they can get.”

In addition to Swansea Storm, a variety of other organisations, teams and charities were awarded SwansAid grants totalling £14,000.

They included the Volcano Theatre for climbing equipment and the URDD to help them establish a new netball club.

If you want to find out more about SwansAid and how it could help your organisation, email Helen@scfccommunitytrust.co.uk